Amazing What Politicians Used To Say

Obama gave his state of the union address last night–my morning commute was full of recap and commentary. It ran the gamut, as the joke goes, from A to B.

In that light, it’s interesting to see how American politicians used to talk. Here’s how Huey Long responded to the problem of joblessness:[1. video of this speech appears at the link provided. The whole thing is worth listening to. It takes a while, but Long really gets into it. The crowd, made up of Senate and Congressional aides, seems to love it.] “How many men ever went to a barbecue and would let one man take off the table what’s intended for 9/10th of the people to eat?” The crowd laughs, and Long continues:

What’s Morgan and Baruch and Rockefeller and Mellon going to do with all that grub? They can’t eat it, they can’t wear the clothes, they can’t live in the houses.

Giv’em a yacht! Giv’em a Palace! Send ’em to Reno and give them a new wife when they want it, if that’s what they want. [Laughter] But when they’ve got everything on God’s loving earth that they can eat and they can wear and they can live in, and all that their children can live in and wear and eat, and all of their children’s children can use, then we’ve got to call Mr. Morgan and Mr. Mellon an Mr. Rockefeller back and say, come back here, put that stuff back on this table here that you took away from here that you don’t need. Leave something else for the American people to consume. And that’s the program.

The only way you’ll ever be able to feed the balance of the people is to make that man come back and bring back some of that grub that he ain’t got no business with!

Long proposed confiscating the fortunes of the richest Americans. “We would say, ‘All right for your first million dollars, but after you get that rich you will have to start helping the balance of us.’ “$3 or $4 million is enough for any one person and his children and his children’s children.” Confiscate this excess through taxation, Long argued, “and with this money we will provide a home and the comforts of home, with such common conveniences as radio and automobile, for every family in America, free of debt.”

Long was vague about the specifics, but the basic thrust was clear: rich men in America, he argued, “have more luxuries than anyone can possibly use.” He would leave them still rich, he argued, but not so rich that other men had to starve.

It’s remarkable hearing a US Senator talk that way.  Can you imagine anything similar today? Long argues that since the rich profit from the labor of the poor, the poor are entitled to expect a decent living. Franklin Roosevelt regarded Long as “the most dangerous man in America.”

Long came from a comfortable family in a very poor northern Louisiana county. A voracious reader, with a near photographic memory, he was also ambitious, argumentative, and brash. After working as a traveling salesman, he earned a law degree and set up a practice specializing in attacking and antagonizing elites and the wealthy. He combined a genuine and passionate anti-elitism, and a sense of the multiple injustices poverty might foster, with a salesman’s willingness to stretch the truth. Elected a Railroad Commissioner in 1919, he used the position to build a political network he rewarded with public works projects.

Long working the ref at an LSU football game

As governor, elected in 1928, he followed the same course: he initiated road building projects, built bridges and hospitals and schools most notably LSU), and more or less dragged what had been a badly backwards state into the 20th century. His political supporters got jobs and contracts, and were expected to kick some of the state money back to Long. Long’s spending massively increased the state’s debt, but he argued, rightly as it turned out, that Louisiana could not function as a modern economy unless it paved its mostly dirt roads and built modern school facilities.

Long had a knack for reaching ordinary people—his work as a salesman, and his love of literature, gifted him with vivid speech and a strong writing style. He grasped radio’s potential early on, and opponents found it almost impossible to move public opinion against him. He became a US Senator in 1932, and at first he supported the New Deal. But he quickly began attacking FDR as a conservative tool of the rich.

Long told reporters in 1933 that he wanted inflation, and that “he did not care how inflation was brought about,” whether by devaluing the dollar or printing more money or adding silver-backed currency. “I was raised in the South,” he told reporters in a truly remarkable moment, “and lots of my life has been spent among the Negroes.” “They get to recognize certain basic factors,” Long continued, and “I remember one time a Negro said: ‘a white man gets worried about money and worries and worries and worries and blows his head off. A Negro gets worried about money and goes to sleep’.”

Long wanted inflation, by any means, and he dismissed worries about inflation by citing the imaginary observations of an imaginary negro. He conjured up a gold bug’s nightmare, an economy in which the whimsical and folksy sayings of fictitious African American peasants govern monetary policy. He would, he added, shorten working hours: “if necessary he would shorten the year.” “It’s all in the Scriptures,” he told reporters. Long would the use “the Bible and Negro Philosophy” to end the slump, the headline said.[1. New York Times, Jan 27, 1933 p. 5.] 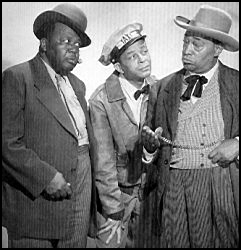 Race-baiting dominated southern politics in the 1930s. That Long would claim to be basing his economic policies on African American folk wisdom is striking in itself; he also assumed the nickname “Kingfish” after a comical scheming character on the Amos and Andy show.[1. it’s weirder than that–Amos and Andy was of course two white guys in blackface, who performed multiple characters.]

When it served his goals, Long played the buffoon–he was happy to make himself slightly silly, to seem not to take himself too seriously: it was part of his subversive appeal.

He announced his candidacy for President in 1934 through a national organization, the “Share Our Wealth” society, and by 1935 he claimed more than 7.5 million members. For his Presidential campaign he wrote a song, Every Man a King.” By then, Roosevelt had come to regard Long as the most dangerous man in America. He might not win the Presidency, but he could certainly split the Democratic vote.

Long was assassinated by a political rival in 1935. The Share Our Wealth Society continued for a short time but was partially undermined by FDR’s own social activism in the “second new deal,” particularly by social security, which established a guaranteed pension fund mildly similar to what Long had argued for.

When Long shows up in history texts he’s usually described as a “demagogue,” or corrupt: it’s one of the ways we avoid having serious discussions about the distribution of wealth. High school students know Long through Robert Penn Warren’s All the King’s Men, which is almost always  described as based on Long’s career even though Warren himself firmly denied this. [1. full cite at wikepedia: Warren did not encourage an association of his character with Long, stating to interviewer Charles Bohner in 1964, “Willie Stark was not Huey Long. Willie was only himself, whatever that self turned out to be.”] Whatever you might think of Long, look at how much our political discourse has changed. Can you imagine a US senator saying anything remotely like that today? Imagine, for example, a Senator proposing a heavy tax on hedge fund managers, with the resulting money used to provide health care for every American, or a free college or trade school education, or subsidized solar power.

Where you find extreme positions in Americans politics today, you find them all on the right, and all in favor of distributing wealth upward: Ron Paul wants to abolish the Fed and establish a gold standard; Paul Ryan wants to eliminate social security and medicare. Social security is described as an “entitlement,” which has to be cut: unbounded, untaxed windfall profits for the people who crashed the economy are imagined as natural and inevitable. We’d all be better off if our national conversation had more breadth and more genuine options.